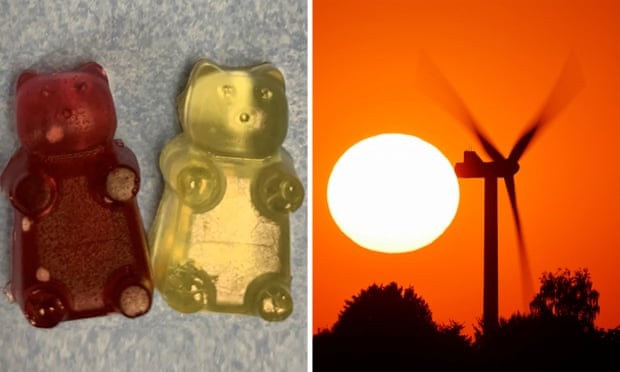 The next generation of wind turbine blades could be recycled into gummy bears at the end of their service, scientists have said.

Researchers at Michigan State University have made a composite resin for the blades by combining glass fibres with a plant-derived polymer and a synthetic one. Once the blades have reached the end of their lifespan the materials can be broken down and recycled to make new products including turbine blades – and chewy sweets.

Wind power is one of the dominant forms of renewable energy. However, turbine blades, usually made of fibreglass, can be as long as half a football field and cause problems with disposal, with many discarded in landfills when they reach the end of their use cycle.

To combat the waste, researchers designed a new form of resin. Digesting the resin in an alkaline solution produced potassium lactate, which can be purified and made into sweets and sports drinks.

“We recovered food-grade potassium lactate and used it to make gummy bear candies, which I ate,” said John Dorgan, one of the authors of the paper.

On eating gummy bears that are derived from a wind turbine, Dorgan says “a carbon atom derived from a plant, like corn or grass, is no different from a carbon atom that came from a fossil fuel. It’s all part of the global carbon cycle, and we’ve shown that we can go from biomass in the field to durable plastic materials and back to foodstuffs.”

He added: “The beauty of our resin system is that at the end of its use cycle, we can dissolve it, and that releases it from whatever matrix it’s in so that it can be used over and over again in an infinite loop. That’s the goal of the circular economy.”