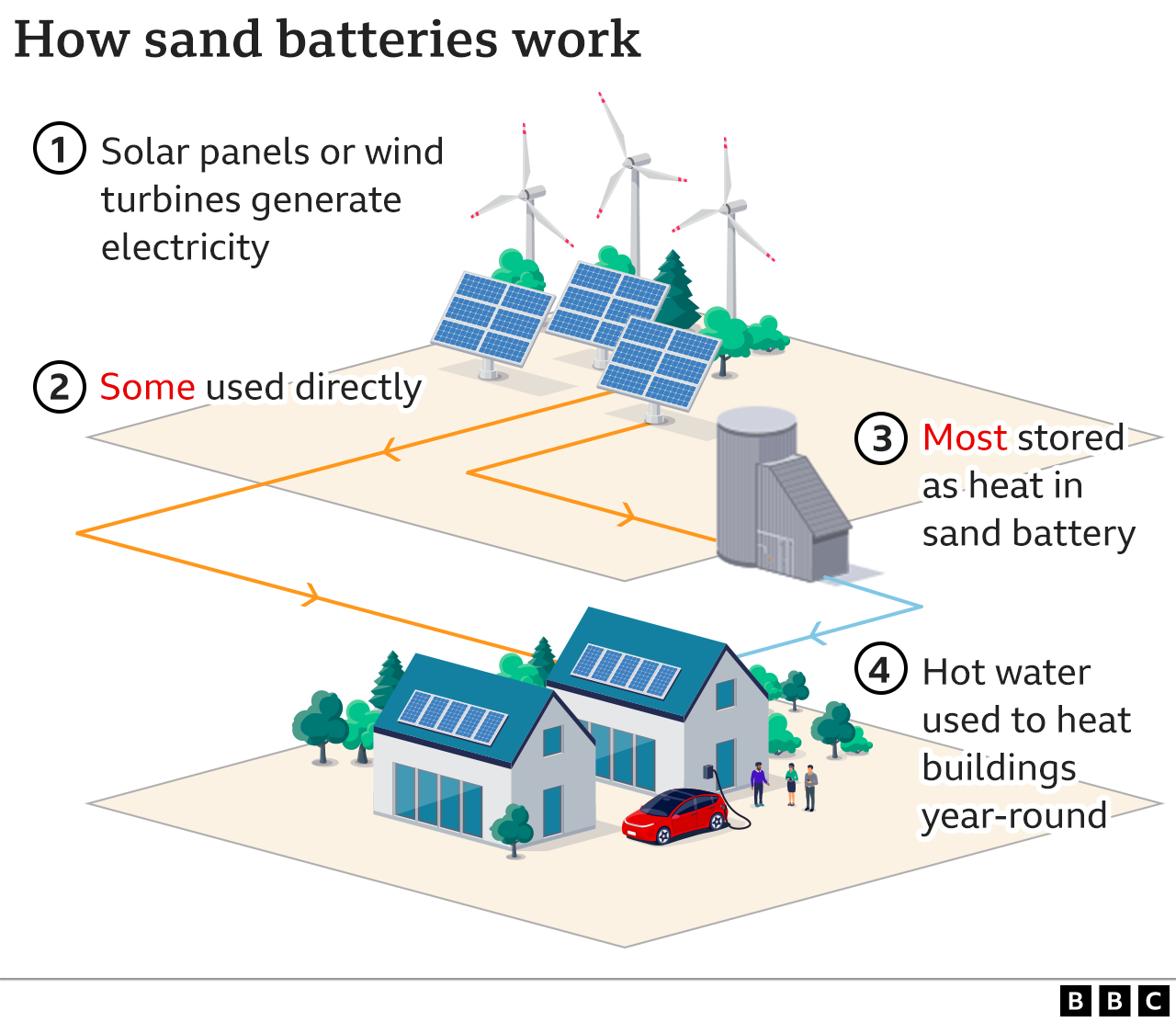 Finnish researchers have installed the world’s first fully working «sand battery» which can store green power for months at a time. The developers say this could solve the problem of year-round supply, a major issue for green energy.

Using low-grade sand, the device is charged up with heat made from cheap electricity from solar or wind. The sand stores the heat at around 500C, which can then warm homes in winter when energy is more expensive.

In a corner of a small power plant in western Finland stands a new piece of technology. The key element in this device? Around 100 tonnes of builder’s sand, piled high inside a dull grey silo. These rough and ready grains may well represent a simple, cost-effective way of storing power for when it’s needed most.

Because of climate change and now thanks to the rapidly rising price of fossil fuels, there’s a surge of investment in new renewable energy production.

But while new solar panels and wind turbines can be quickly added to national grids, these extra sources also present huge challenges.

The toughest question is about intermittency — how do you keep the lights on when the sun doesn’t shine and the wind doesn’t blow?

Adding more renewables to the electricity grid also means you need to boost other energy sources to balance the network, as too much or too little power can cause it to collapse.

The most obvious answer to these problems is large scale batteries which can store and balance energy demands as the grid becomes greener.

Right now, most batteries are made with lithium and are expensive with a large, physical footprint, and can only cope with a limited amount of excess power.

But in the town of Kankaanpää, a team of young Finnish engineers have completed the first commercial installation of a battery made from sand that they believe can solve the storage problem in a low-cost, low impact way.

«Whenever there’s like this high surge of available green electricity, we want to be able to get it into the storage really quickly,» said Markku Ylönen, one of the two founders of Polar Night Energy who have developed the product.

The device has been installed in the Vatajankoski power plant which runs the district heating system for the area.

Low-cost electricity warms the sand up to 500C by resistive heating (the same process that makes electric fires work). This generates hot air which is circulated in the sand by means of a heat exchanger. Sand is a very effective medium for storing heat and loses little over time. The developers say that their device could keep sand at 500C for several months.

So when energy prices are higher, the battery discharges the hot air which warms water for the district heating system which is then pumped around homes, offices and even the local swimming pool.

The idea for the sand battery was first developed at a former pulp mill in the city of Tampere, with the council donating the work space and providing funding to get it off the ground.

«If we have some power stations that are just working for a few hours in the wintertime, when it’s the coldest, it’s going to be extremely expensive,» said Elina Seppänen, an energy and climate specialist for the city. «But if we have this sort of solution that provides flexibility for the use, and storage of heat, that would help a lot in terms of expense, I think.»

One of the big challenges now is whether the technology can be scaled up to really make a difference — and will the developers be able to use it to get electricity out as well as heat? The efficiency falls dramatically when the sand is used to just return power to the electricity grid.

But storing green energy as heat for the longer term is also a huge opportunity for industry, where most of the process heat that’s used in food and drink, textiles or pharmaceuticals comes from the burning of fossil fuels.

Other research groups, such as the US National Renewable Energy Laboratory are actively looking at sand as a viable form of battery for green power. But the Finns are the first with a working, commercial system, that so far is performing well, according to the man who’s invested in the system.

«It’s really simple, but we liked the idea of trying something new, to be the first in the world to do something like this,» said Pekka Passi, the managing director of the Vatajankoski power plant. «It’s a bit crazy, if you wish, but I think it’s going to be a success.»