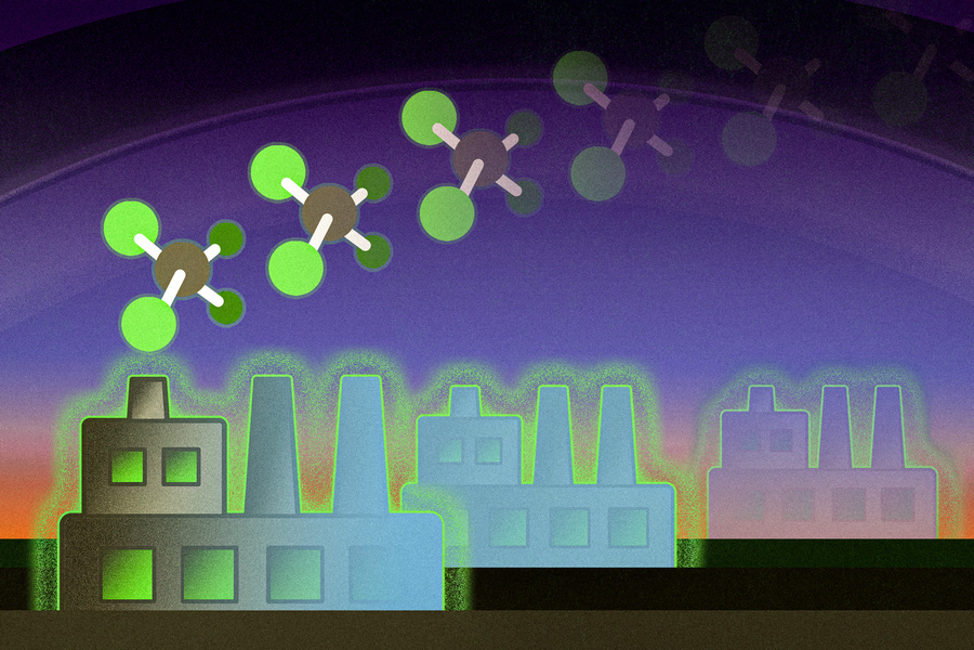 MIT scientists have found that ozone-depleting chlorofluorocarbons, or CFCs, stay in the atmosphere for a shorter amount of time than previously estimated. Their study suggests that CFCs, which were globally phased out in 2010, should be circulating at much lower concentrations than what has recently been measured.

The new results, published in Nature Communications, imply that new, illegal production of CFCs has likely occurred in recent years. Specifically, the analysis points to new emissions of CFC-11, CFC-12, and CFC-113. These emissions would be in violation of the Montreal Protocol, the international treaty designed to phase out the production and consumption of CFCs and other ozone-damaging chemicals.

The current study’s estimates of new global CFC-11 emissions is higher than what previous studies report. This is also the first study to quantify new global emissions of CFC-12 and CFC-113.

Prior to their global phaseout, CFCs were widely used in the manufacturing of refrigerants, aerosol sprays, chemical solvents, and building insulation. When they are emitted into the atmosphere, the chemicals can loft to the stratosphere, where they interact with ultraviolet light to release chlorine atoms, the potent agents that erode the Earth’s protective ozone.

Today, CFCs are mostly emitted by “banks” — old refrigerators, air conditioners, and insulation that were manufactured before the chemical ban and have since been slowly leaking CFCs into the atmosphere.

Rather than consider the lifetimes and emissions of each gas separately, as most models do, the research team looked at CFC-11, 12, and 113 together, in order to account for similar atmospheric processes that influence their lifetimes (such as winds). These processes have been modeled by seven different chemistry-climate models, each of which provides an estimate of the gas’ atmospheric lifetime over time.

When the researchers updated their estimates of CFC bank emissions and compared them with total global emissions for this three-year period, they found evidence for new, unexpected emissions on the order of 20 gigagrams, or 20 billion grams, for each chemical.

The results suggest that during this period, there was new, illegal production of CFC-11 that was higher than previous estimates, in addition to new production of CFC-12 and 113, which had not been seen before. Estimates are that these new CFC emissions are equivalent to the total yearly greenhouse gas emissions emitted by the United Kingdom.

It’s not entirely surprising to find unexpected emissions of CFC-12, as the chemical is often co-produced in manufacturing processes that emit CFC-11. For CFC-113, the chemical’s use is permitted under the Montreal Protocol as a feedstock to make other chemicals. But the team calculates that unexpected emissions of CFC-113 are about 10 times higher than what the treaty currently allows.