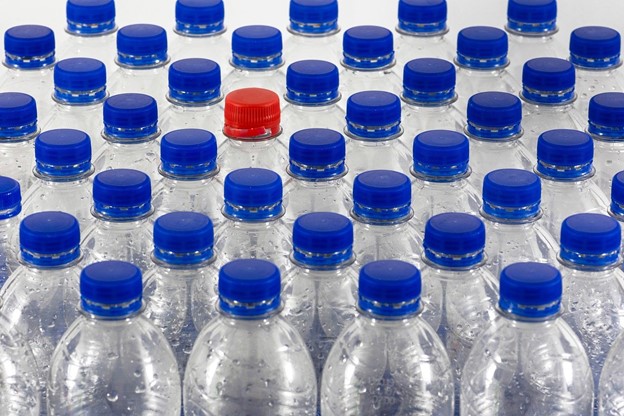 Researchers from Brunel University London found 150 chemicals that leached into drinks from plastic bottles, with 18 of those chemicals found in levels exceeding regulations.

And they found that drinks bottled using recycled Polyethylene Terephthalate (PET) can contained higher concentrations of chemicals than those bottled using new PET, which suggests that problems with the recycling process may be causing contamination.

They are calling for more careful recycling methods to remove the potentially harmful chemicals.

The thermoplastic PET is the third most widely used type of plastic in food packaging, with one of its most popular end uses in single-use drinks bottles. Such bottles are also one of the most commonly found forms of plastic litter, leading to a number of initiatives to increase levels of PET recycling. A recent EU directive called for PET bottles to contain at least 30% recycled content by 2030.

But PET is also known for being the source of a number of potential chemical contaminants, including endocrine disruptors such as Bisphenol A, which can cause reproductive disorders, cardiovascular problems and cancer, among other ill effects.

The researchers reviewed 91 studies from around the world looking at chemical contamination from plastic bottles. Dr Eleni Iacovidou, a lecturer from Brunel’s centre for pollution research and policy, who led the study, said: “We found these chemicals can come from various sources, such as the catalysts and additives used during production and degradation during PET production, and degradation that can happen across a bottle’s lifecycle.”

In recycled PET bottles, many of the contaminants found had arisen as a result of contamination of the feedstock, including labels, according to the paper, published in the Journal of Hazardous Materials. The researchers wrote: “This evidence implies that highly recyclable products, such as PET drink bottles, can be inapt for closed-loop recycling when poorly designed, indicating the need for greater adoption of design-for-recycling principles and improvements at the waste-management infrastructure level.”

In particular, to reduce the number of chemicals found in bottled drinks, the study suggests that a technology known as the “super cleaning” process could be used, which uses a three-stage process to clean old plastics before recycling – a high-temperature wash, a gas wash, and a chemical wash.

Iacovidou said: “Recycling processes already include the cleaning of the bottles before turning them into secondary raw material for use. By investing in new super-cleaning technologies, we can maximise the likelihood of decontaminating recycled PET to levels similar to virgin PET.”

As ever though, the ultimate solution to the problem is for society to begin an end to the use of PET altogether, Iacovidou said.

“We all have a responsibility to bear. We need to start thinking about how to prevent the use of PET bottles in our households by investing, for example, in water filters, or large water containers and learning how to dispose of our plastic waste properly,” she said.

“If we reduce our consumption of PET then we will drive change further up the system. Less demand equals less production in the first place.”