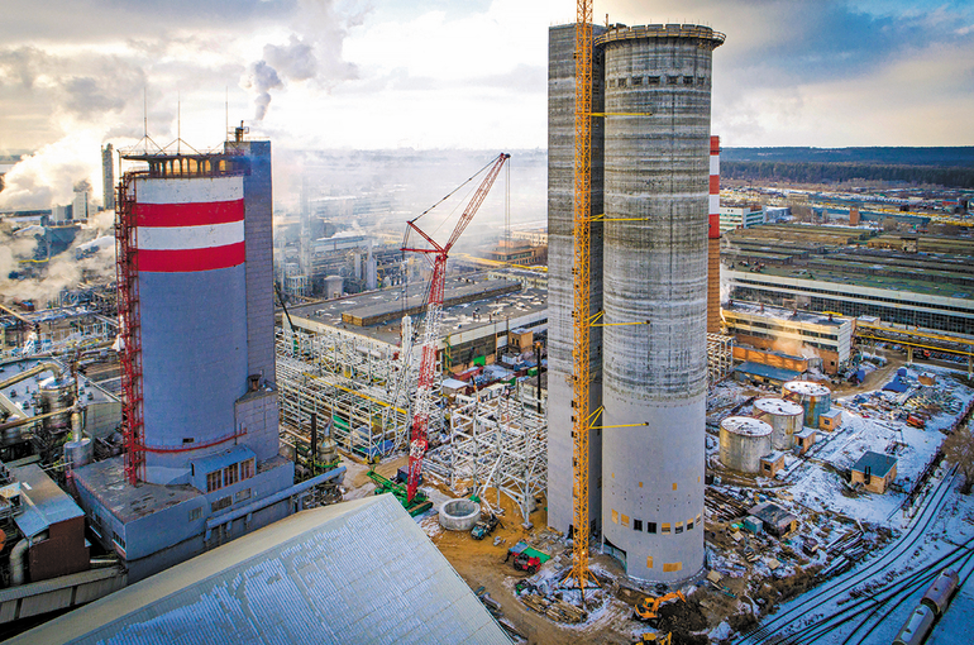 One of the largest producers of ammonia both in Russia and the world, Togliattiazot (TOAZ) has taken another step towards improving environmental safety. Recently a purification device was installed at the very top of the 107-meter granulation tower (prilling tower) of the third urea unit (this unit is currently under construction). The purpose of the structure is to trap industrial dust so that it does not enter the atmosphere. As a result, more than 93 percent of the emissions from the grand tower will be captured by this installation. In addition to the ecological effect, there is also an economic effect: urea in the form of dust will return to the production chain.

The new unit, which the enterprise has been building since 2018, can be viewed as a symbol of a thoughtful approach to sustainable development. It will allow to increase the output of the demanded fertilizer – urea – by 70 percent and will bring additional revenue and tax proceeds to the budgets of all levels. Also, the new production of urea will significantly reduce the dependence of Togliattiazot on the transit of ammonia, its main product, through the territory of Ukraine, thereby increasing the safety of the enterprise and the Russian economy.

The facility (even though it’s currently under construction) is already creating jobs for local residents involved in construction, and after launch, more than 80 high-tech and highly paid jobs will appear for operators, and in addition to them, for service personnel. The unit, thanks to the use of modern technologies, will practically not create an additional burden on the environment, which is extremely important for Togliatti and its inhabitants. Moreover, thanks to the construction of the third unit, TOAZ will be able to minimize greenhouse gas emissions, since carbon dioxide is a raw material for the production of urea. Thus, the Togliatti giant will assist the state in solving the task of reducing greenhouse gas emissions, announced in April by President Vladimir Putin in his Address to the Federal Assembly.

And this is not the only example of a balanced and responsible approach to environmental impact that Togliattiazot is pursuing. The enterprise annually allocates significant resources for environmental protection measures and environmental protection projects. So, in 2020, more than 300 million rubles were invested in this direction. Since all employees and managers of the company live in Togliatti, the quality of the environment is important to them. Therefore, in the city and its environs, actions are regularly held to reproduce biological resources, to plant greenery, plant seedlings to restore urban forests damaged by fires in 2010, community cleanups are organized in the city, as well as eco-bike rides, events to collect waste paper and batteries. Many employees – part of more than four thousand of staff – take an active part in these events.

In day-to-day operations, minimizing environmental impact is a top priority for the chemical giant. So, in 2020, TOAZ has almost halved emissions compared to the previous year, and over the past five years it has managed to raise the share of waste recycling to 75 percent.

Improvement of environmental and industrial safety, efficiency and reliability of production facilities are being systematically carried out as part of the strategic program for the modernization of production, in which more than 51 billion rubles have been invested. Thanks to this program, TOAZ has significantly reduced gas consumption coefficients (that is, the consumption of this natural resource per unit of production has been lowered). For example, at the third ammonia production unit, thanks to technical re-equipment, the consumption of natural gas per ton of product was reduced by almost eight percent.