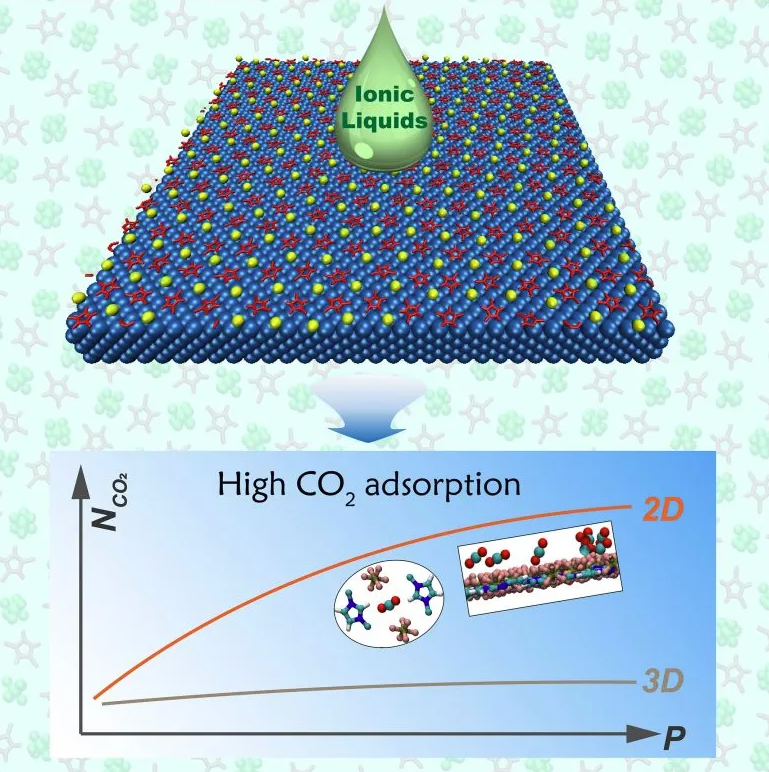 A new technology for CO2 capture, utilization, and storage has attracted broad attention in the context of global concern about climate change and greenhouse gas control.

Due to their ultralow vapor pressure and environmentally friendly features, ionic liquids are considered a new type of CO2 adsorbent. They are composed of only cations (positively charged ions) and anions (negatively-charged ions).

Recently, a scientists found that two-dimensional ionic liquids show a completely different melting behavior than the bulk phase, leading to a high CO2 adsorption capacity and structural robustness during the CO2 adsorption-desorption process. The research group was led by Profs Suojiang Zhang and Hongyan He from the Institute of Process Engineering (IPE) of the Chinese Academy of Sciences (CAS).

This study was published on July 12, 2022, in the journal Cell Reports Physical Science.

The scientists discovered that ionic liquids can form a two-dimensional-monolayer, ordered, checkerboard structure when supported by a metal surface. The two-dimensional ionic liquids exhibited anomalous stepwise melting processes, involving localized-rotated, out-of-plane-flipped, and fully disordered states, rather than the single melting point for the bulk ionic liquids.

“Anions and cations are arranged together in a checkerboard manner, thus forming a two-dimensional, ordered Z-bond network. This makes it more likely for the multi-step melting behaviors such as ionic rotation and flip,” said Prof. He.

The massive molecular dynamics simulation indicates that the two-dimensional ionic liquids show excellent performance for CO2 capture due to the unsaturated and exposed Z-bonds. The mole fraction of CO2 adsorbed by two-dimensional [Mmim]PF6 was improved by at least one order of magnitude compared with the corresponding bulk ionic liquids.

“The higher CO2 adsorption capability suggests that such two-dimensional ionic liquids could serve as functional layers of the catalyst to enhance the mass transfer process of CO2, which is important for the fixation and conversion of CO2,” said Associate Professor Yanlei Wang of IPE.

This two-dimensional editing technique for ionic liquids is expected to provide a new method for the precise control and functional design of liquids, which is promising for various chemical engineering applications involving solvents, electrolytes, and liquid catalysts.